Weekly topics and continuing themes include: perceptions of the natural world, creation and creativity, miracles, other worlds and the other-worldly, monsters, dream-visions and mysticism, the fantastic, hybridity, apocalypse, the idyllic and golden ages, utopias and other alternative worlds, automata, the nature of humanity and/as intelligent life.

Our adventures will centre on the imaginative worlds of some Medieval French texts: the Reynard romance and selections from the writings of Marie de France, Christine de Pizan, and François Rabelais. Other readings will include bestiaries, encyclopaedias, universal histories, fables, saints’ lives, maps, almanachs, books of hours, lyric and debate poetry, games, miscellanies, and plenty of marginalia. While our principal focus will be the study of literary works, we will also explore their influence throughout Medieval Europe; the historical landscape in which these landmarks are situated; the cultural background against which their actions are staged; and their relationship to an integrated creative and intellectual environment—including visual and plastic arts, music, ideas, technology, ecology, and the sciences.

Classes consist of interactive lectures interspersed with discussions. Reading assignments include translations of literary works (they may of course be read in the original, but this is not expected), and digitized manuscripts and other contemporary objects freely accessible online. Assessment is based on a midterm commentary paper; a round-table short presentation followed by a student-led discussion or debate; a bibliography; a final research project (“making a marvel”) and its presentation; and, throughout the course, class participation and regular short commentary writing on the course blog. The course is taught in English. Work may be written in English or another language according to preference or program requirements. (This course is required for the UBC Medieval Studies Major and Minor.)

This course aims to provide you with:

For some idea about what this course may be like, information about previous O’Brien Medieval courses at UBC may be helpful:

The marvellous medievalist meme at the top of this page is an exemplary case of what this course is aiming towards, not just at but also beyond its end: thinking Medievally and/or Medievalistically. These ends cannot (and therefore will not) be formally assessed or quantified at this course’s end. Here is an exemplary case, which also shows how such a learning outcome is vital but also fundamentally (and indeed essentially) unpredictable.

The meme at the top of this page has as its base image f. 27r of the Lindisfarne Gospels (c. 700 CE), British Library Cotton MS Nero D.IV.

The meme was made by Damian Fleming in conversation with Jonathan Hsy. He was reporting a remark arising in conversation among Catriona Duncan, Ravana Eagleheart, Megan Kazakoff, Iona Lister, Luke Oldfield, Sydney Terepocki, and Katie Yakovleva: student participants in a roundtable session on Teaching & Learning Early Middle English in the Undergraduate Curriculum at the Making Early Medieval English conference at the University of Victoria (2016). The meme’s storification adds further participants: Dorothy Kim and other online scribes live-tweeting, Adrienne Boyarin who taught the course that influenced and inspired the students.

Students were central contributors to this creative process, bringing in what they had been learning in formal courses and applying that learning after and outside a formal class and its assignments.

(Images above, as elsewhere on this site, are linked to their sources.
UPDATE (January 2019): well, they were; some have disappeared or been disappeared in the last two years, for example with institutions rebuilding their websites and failing to include redirects (EPIC FACEPALM DESIGN FAIL) but hopefully most should still be findable by searching or by contacting the people involved directly. )

Part of this meme’s posterity, reading and reception history, and creative and critical influence is #IlluminatedAges as a #medievaltwitter public cooperative research network innovation.

Work in progress during the current imaginatio stage of designing and making this course is on Twitter at #mdvl310c (up to July 2017, when the course code was changed) and #mdvl310d.

The shape, movement, and narrative direction of the course will be based on those of some exemplary Medieval marvellous creatures / creations: encyclopaedic works:

The course grew out of the elements that follow below, which appeared in 2016’s MDVL301A & FREN336. (All images, as elsewhere on this site, are hyperlinked.) 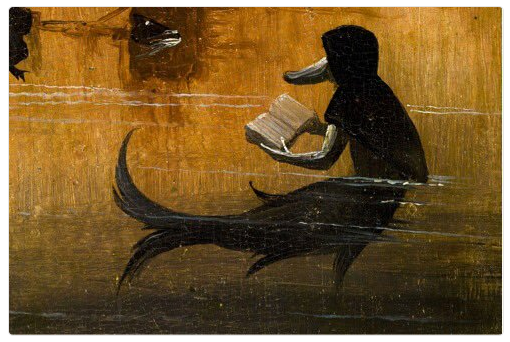 The start of this course, in January 2018, coincides (and hopefully conjoins) with something that will be happening in a parallel world, that of academic conferences and conferring. The 2018 MLA (Modern Language Association) Convention’s overarching presidential theme is “STATES OF INSECURITY” and one of the MLA Occitan forum’s sessions is on “JOY.” Sarah Kay came up with that idea at our meeting at the 2017 MLA; it has haunted and fed early work on this present course’s design. Here is the full Call For Papers:

Rapture, ecstasy—contemplation, expression, even regulation—–and play. Thinking through affect and amusement, between folia and mezura, anguish and the “consolation of philosophy,” binding or subverting society.

The forum invites submissions that discus the capacity of Occitan song, or of the non-lyric works associated with it, to combine feeling with reflection, and even with philosophy. Exploration is encouraged of any of the wide range of meanings of the word joy (including jouissance, rapture, and play), as well as of its antonyms; a new look at the time-honored opposition between folia and mezura is called for, in both its moral and its social or political ramifications; it is time for the relationship between joy and consolation to be addressed.

This is essentially a course about MEDIEVAL AWESOMENESS. The philology of awe and awesome lies deeper in the course’s genesis; it first appeared, about ecocriticism, in conversation with Louisa Mackenzie, to whom thanks and #🦄.