Being a BODY OF EVIDENCE in appendix to post (1) of the same title.

There is some overlap (ex. UBC Insiders) between the sources that follow below and blogs that I’ve been reading regularly for their contributions to commentary and critique (including constructive and positive criticism, as is right and proper). For a list of what I’ve been reading, see here. I read a lot, and fast, so I’m always amenable to reading more (provided that it is well-thought-out and well-written): please don’t hesitate to share other commentating resources.

Several main intertwining narrative threads appear here. I have left them that way rather than separating out strands, as they are intrinsically interconnected around a main theme:
relationships between the Board of Governors & their community
+ problematic communication (or non-communication) by the Board
= bad governance (see earlier allegory), injustice, and distrust.

I’ll maintain this as a list of raw links; it will be updated. I’m now up to date with all the UBC NEWS archives back to May 2015, and everything I had posted on Twitter back to October 2015. I haven’t yet cross-referenced that with what I’d posted on Facebook.

I. My original intention for this post: the rhetoric of faith and belief. That (with full texts from some of the items listed here) will now be post (3) in this series.

II. Colleagues are discussing ideas for ways forward, constructive and reconstructive, and imagining what a caretaker government would look like in an interim period between Governors (and the Presidential Search Committee) stepping down and, after a proper external inquiry, a new Board and President coming in. That may be unheard of at UBC, but that doesn’t mean it’s impossible or unimaginable: there are precedents and parallels in other places, times, worlds… So: there will be more, along the way, in the way of positive suggestions for medium- and long-term stabilisation.

Legal compliance is only one element of the Board’s obligations, and this is writ in law. Ethics, trust, honesty, integrity, courtesy, respect, and dignity feature in the overarching frame to appropriate behaviour. There is no mention of “faith” except in an obligation to Governors to “act in good faith” themselves.

19.1 The members of the board of a university must act in the best interests of the university.

The UBC Board of Governors code of conduct & ethics:

The Code of Conduct for Members of the UBC Board of Governors defines standards and makes related provisions for the conduct of Governors, with a view to affirming the integrity of the Governors and the Board in discharging their responsibilities to the University. […]

Governors act honestly and in good faith and in the best interests of the University and exercise the care, diligence and skill of a reasonably prudent person.Each Governor takes all reasonable steps to avoid conflicts of interest and uses their best personal judgment in assessing whether or not any transaction, relationship or opportunity […] gives rise to a conflict of interest. […]

It is the responsibility of the Board of Governors to:

1. Approve and monitor, through the Administration, compliance with the policies, bylaws and procedures that govern the University operations.

2. Approve and act as a guardian of the University’s values.

3. Direct the Administration to ensure that the University operates at all times within applicable laws and regulations, and to the highest ethical and moral standards.

The Board of Governors shall promote a culture of integrity at the University through its own actions, its interaction with senior executives and external parties, and through selection and review of the President.

Each Governor shall act in the highest ethical manner and with integrity in all professional dealings.

From the aforementioned General Conduct Principles for Public Appointees:

Appointees are expected to act at all times in good faith and with honesty and due diligence, for the public interest. […]

The conduct and language of appointees must be free from any discrimination or harassment prohibited by the Human Rights Code. Appointees’ conduct should reflect social standards of courtesy, respect and dignity.

From Standards of ethical conduct for directors of public sector organizations:

The fundamental relationship between a director and the public sector organization on which the director serves should be one of trust; essential to trust is a commitment to honesty and integrity. Ethical conduct within this relationship imposes certain obligations. […]

1. COMPLIANCE WITH THE LAW

1.1 Directors should act at all times in full compliance with both the letter and the spirit of all applicable laws.

1.2 In his/her relationship with the organization, no director should commit or condone an unethical or illegal act or instruct another director, employee, or supplier to do so. […]

1.5 Directors should not only comply fully with the law, but should also avoid any situation which could be perceived as improper or indicate a casual attitude towards compliance. […]

10.2 Each director should adhere to the minimum standards described herein and in the organization’s code of conduct, and to the standards set out in applicable policies, guidelines or legislation.

10.4 To demonstrate determination and commitment, each director should review and declare compliance with the organization’s code of conduct and ethics annually.

http://jberdahl.blogspot.ca/2015/10/response-to-former-sauder-school-dean.html
also at Vancouver Sun in response to Michael Goldberg piece of 2016-03-23: http://www.vancouversun.com/touch/story.html?id=11469684

http://www.theglobeandmail.com/opinion/letters/oct-27-voting-reform-kumquats-vs-oranges-plus-other-letters-to-the-editor/article26995341/
in reply to Globe & Mail piece of 2016-10-22

Petition requesting a motion of no confidence in the Board of Governors presented to the Faculty Association on 11 February: https://docs.google.com/document/d/1SGAhOPcl741OtXQuokUhzzShT1OoLijEHxHbgB1y71s/pub 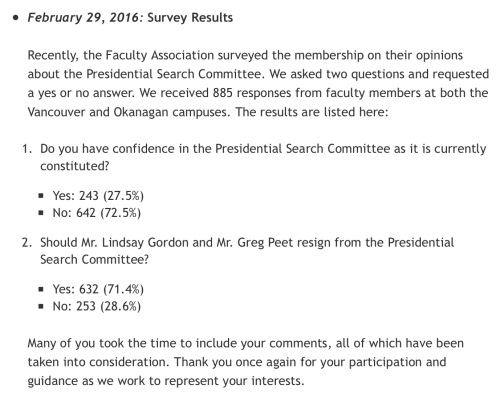 (no new news; some discussion starting on an online forum started by the Faculty Association, but this is not public: open only to faculty who have signed up & in)