This is the Charlie Hebdo I grew up with, especially that of my teenage years: a magazine that is about protecting the poor and weak(ened) and underpriviledged; taking a stand against all forms of xenophobia in the name of internationalist common humanism; attacking power and defending the disempowered and powerless, while creatively suggesting alternatives to all that power-centred stuff (and this is one of the most important roles and raisons d’être of satire).

[Caveat: quick note = probable typos etc., for which I apologise in advance. All to the good if typos are amusing, though.]

Charlie was crucial in helping many people grow, at that important stage in intellectual development, towards human rights, anti-racism, anti-fascism, gay rights, feminism; to the rights of other animals and our responsibilities towards them, and to larger rights, those of a planet and beyond. We woke up to being sensitive sentient beings, to being individuals and at the same time to being smaller parts of something larger; not as tiny insignificant cogs in a machine, but as interconnected and interactive members of a living body. It brought many friends to liberalism (in an older and non-neo sense) and to socialism, and also to other forms of ethical, political, and social consciousness: radical activism, hacking, performance art(s), and religion.

That phase brought some people to faith, and for those who were already there, served to strengthen faith through humility, solidarity, and shared suffering. It brought others (such as myself) to respect and (do my best to) understand people of faith, through what we shared. When reading powerful cartoons (or other images, or text, or both); when sharing in their sentiment / spirit (depending on your point of view / mind); when continuing what they and their makers do by taking a bodily stand at vigils and demonstrations, offer oneself up sympathetically, however symbolically, as a target for physical violence (unlikely right here in Vancouver), be that with or without faith: these are all rather Medieval/ising things to do.

Witnessing, with its links to martyrdom. Suffering together, with and for others: Passion, compassion, and that wild wobbly wooly line between sympathy and empathy. You know those semi-wild sheep living on high moors in Scotland, Ireland, the north of England, and Iceland? Whose wool is gathered from where they scratch it off on dry-stone walls and stumpy scrubby trees and suchlike? The resulting yarn twists together strands if varying thickness, with fuzzy areas clouding off. It’s wiggly, sometimes obtusely so. It’s thick, tough, resilient, and also stretchy. Pingable, pings back to shape or something near enough that works just as well. These wild wools and their yarn make amazing felt that is more or less indestructible and immortal.

It’s time to reappropriate, or rather, to liberate the phrase “wooly thinking” from its negative loading. Spread more of its positive feminine-textuality idea. Some of the best work on textual metaphors and literature and reading is (of course) in Medieval studies, and has much to offer other areas of thinking and criticism about literature; those “word-arts” that include cartoons and other combinations of words and images. 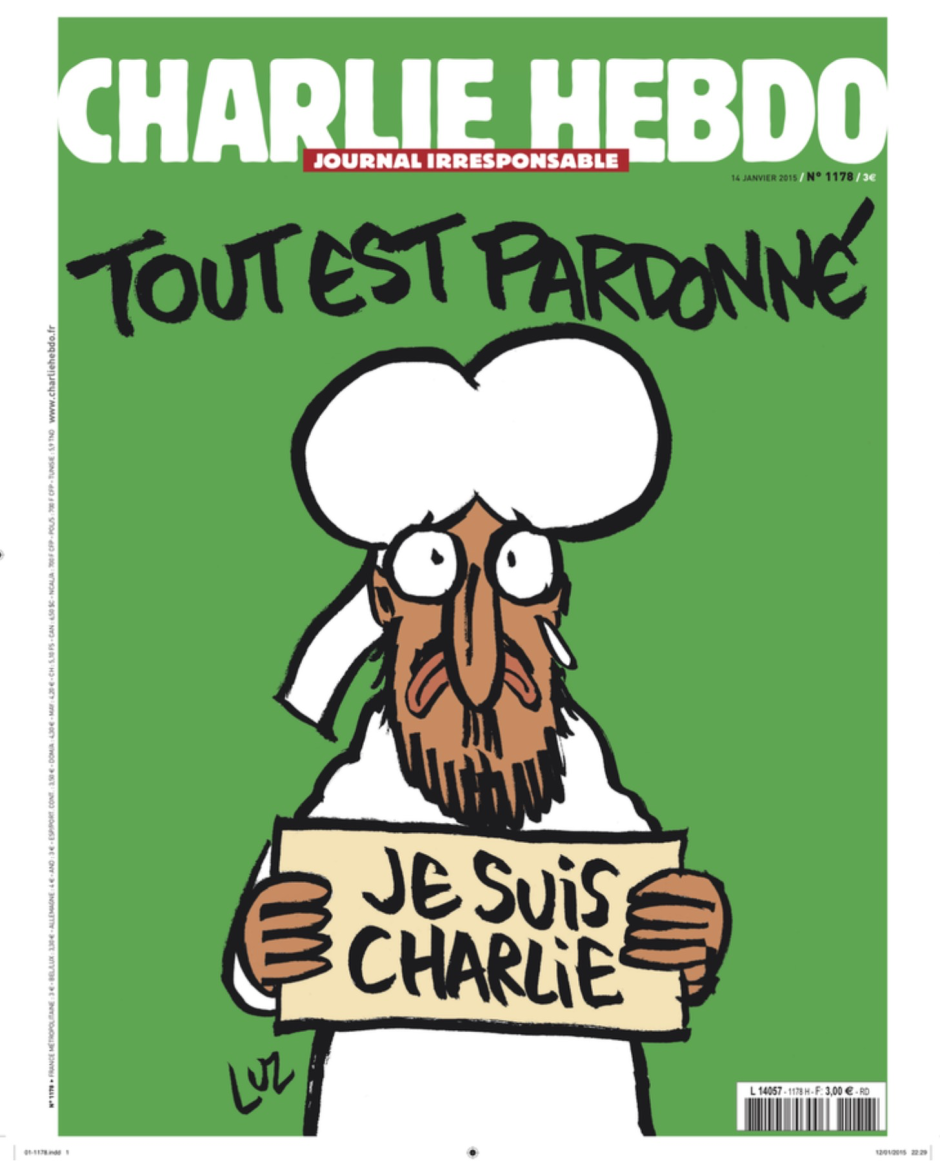 At that Key Stage, Charlie was part of the common ground that kept us together across political and religious difference. This is essential and interesting; integral to our very essence, to how we were then, and how we were in process of becoming who we are now; and interesting in the full literal sense, inter + essere: we were “being together” in a shared place, where something happened, back and forth, between and amongst us.

Cartoons are one of the best conversation-starters in existence. I’ve seen more discussions start on the bus and on park-benches from reading them over someone’s shoulder (and book-covers, another potent word-image combination) than any other kind of reading-matter: this literary form lends itself well to opening chat with strangers. I use cartoons in teaching when I can, and in talks. They’re excellent for punctuating blog-posts, which are our period’s happy continuation of the multi-media manuscript system (a whole ecosystem, including roots and branches and networks of intertextuality, continuation, commentary, pasts and futures) after that unhappy hiatus, the evolutionary blind-alley of the printed book and all the black-and-white thinking and limitations tied to it.

Cartoons in Charlie (and the writing in Charlie, let’s not forget the words) also led us to look into back-story and background: to context, history, and perspective. These are vital to satire, and what makes satire difficult. Satire needs cultural sensitivity: it is always very specific, even though the essentials under criticism–hubris and hypocrisy, thuggish stupidity, evil–are human universals across time and space. There’s always at least two levels to the joke: superficial (universal and immediate: clear, simple, easy, fast) and deeper (cultural specifics: slower). Reading Charlie was ideal for geeky nerdy people like me, and may have brought others to geekiness, to searching for background information, to amateur detective-work and quests for knowledge and explanation. Satire brings people to history, geography, sociology, psychology, to cultural studies of all sorts.

In the last few days, we’ve seen how cultural difference can be an impediment to understanding. One of the best pieces I’ve read on the subject (with thanks to BMcC) is:

Satire opens minds up to other cultures not just in the scholarly way, but also in bringing any curious person to seek out general knowledge in an eager and enthusiastic way. The same intellectual curiosity is triggered either way, opening up learning for anyone. It’s a great bridge between non-academic and academic worlds and their discourses. It’s a transition-point connecting people inside and outside universities and the scholarly world, some of whom are our students when they themselves are in a phase of transition as they first arrive here and become students (or at some later point when they realise what “being a student” and the studium of the universitas are about; alas, this is more likely to happen in their final-year than at orientation, but that’s another tragicomic story for another day).

That curiosity is a gift for which we should all be thankful. Other people’s curiosity is also a gift for anyone teaching. What happened last week might be a good thing, if it doesn’t just get more people writing satire but more people reading and thinking and talking satirically and about satire. Using this wonderful free wild stuff, as a great resource and tool. Satire is valuable: politically and socially, as a Pillar Of The Commonwealth; the descendant of the bard, trobador, jester, fool, and many a poet. It reminds us that there are other kinds of “value” in currency besides the crass commercial commodifying sort.

Satire reminds us that there are different kinds of “leadership” too: satire, and any kind of questioning and critical commentary, leads other people to questioning and to knowledge, in a virtual circle of education that acts contrary to vicious circles of unquestioning and ignorance. The latter leads to totalitarian states, built on a concept of “leadership” all too familiar from the previous century and from the rhetoric of the Modern industrial-imperialist state and, this century, of the commodified university as one of its feeder-organs. The former opens paths of good citizenship and, failing that (if a good polis / res publica / civitas goes), resistance. We’re also talking, in religious terms, the “leadership” of ministry and mission, a leadership of intermediation and of service to others, for helping others and helping others to help themselves (and to help others in turn, and so on, thus making the world a better place).

Satire is valuable because it has values and is about communicating these values, however unpopular they might be with the powers-that-be. It stands outside fashion, aware of its dangers, skeptical of unthinking fad-following, keeping a safe distance from the fast easy propaganda of marketing and sales and their abuse (the better to use and control) by those powers-that-be. Satire is powerful because it stands outside power, thinking and questioning and criticising. That is a different, separate, completely independent kind of power–just as its value is a different kind of value–yet essential to political power, at once its alternative and complement.

Many pre-Modern powers understood this relationship and its necessity. The role of modern poet laureates is a poor shadow of that of their ancestors. The same is true of universities. I hope that what happened last week will renew awareness of satire and its value and necessity, and of all those parts of the commonality that are similarly vital to its continuity. I hope this means that those vital parts work together more, revitalised, remembering who they are and how they fit together. Members of one whole body, inter-related parts of a whole integrated ecosystem, vital to its continuation and to that existence being dynamic and interactive and thus alive. JeSuisCharlie: we are all one body, one metaphor made flesh as martyrdom transformed flesh to metaphor.

The associated consequences of satire are curiosity and laughter, and these are shared: sure, we may all be laughing at different things at different points in that laugh; some of that laughter may be uncomfortable (it should be, as any surprise or possibility of surprise should be scary and move you out of your comfort-zone); it may be bittersweet; and the nature of the laughter may change several times in its course. Satirical cartoons can bring people together through shared laughter, a basic bodily function in common from first-year undergraduates to eminent full professors, and reminding us of our common humanity, our common bodily animality, our material vulnerability as we shake with a laughter that can be so powerful it hurts. Cartoons like those in Charlie are meant for everyone and they are for everyone. They are catalysts for social and political equity and fraternity.

Cartoons are also catalysts for liberty. Satire leads to the acknowledgement of ignorance (and prejudice and privilege and any other blinkers) and the investigation of unknown differences, through which readers can come to knowledge, understanding, and wisdom. Knowledge is power is liberation from ignorance. Satire gives perspective. Not the false perspective of the sorts of silly relativism that give deconstruction a bad name (and lead to ethical perils); rather, the perspective in Flatland, of greater knowledge gained through other points of view and through learning how to move into these other viewing-points. It’s scary, this adventure into the unknown, and you will lose something of yourself, of identities of a more static singular sort. Having no fixed place of belonging complicates and may destroy all senses of “appropriateness” and “propriety.” But you will gain so much more. Through liberation from property and all it stands for, you will gain in impropriety (and appreciate satire all the more, in a virtuous circle). The ability to move, to dislocate and relocate, to be transient, travelling with a light foot on all lands: that is how to avoid rooted territoriality, accepting and embracing displacement as the great Good of liberty.

Satirical cartoons keep you honest and human, when you open yourself up to discomfort from the comfort of your armchair (or other privileged position, literal or figurative or both; I write this from a sofa in my home).

Curiosity killed the cat, but it died curious. In a happy enquiring frame of mind, fun-loving, intellectually lively: that cat (an unfashionable but genuinely stylish jazzy hep-cat) died alive and free.