(After the necessary (to my mind) preamble immediately below, there’s some more practical stuff that could be of interest to tech innovators, as a Kickstarter project, etc. The ideas are not as immediately useful as The Chair Redesign Project, but both have a common foundation, in the form of the human posterior; that is, in their fundamental humanism or humanist fundamentalism. Beyond anthropocentric species-ism, the innovations below would be of relevance and potential interest to any sentient sensuous beings.)

The Flamenca/Amor pieces are still a-coming up: 4,000+ new words written 23-24 December, when I had what I think were several good ideas in a row that then started bouncing off each other forming new ideas through interconnection. Bouncing is still going on, which is always nice but means there will be a later stage to the writing; if a first stage is there, and if I can group the early bounces together as a second stage, that gives two posts / delimited bits of writing, and perhaps more at a later date. Before I post any of them up I should post up the older material. I’m aiming to have that as the January writing project.

It’s been good to be thinking about such things again. (Maybe the iron supplements are helping and my brain has been less active / more tired, maybe it’s been / I’ve been more anaemic than I thought.) There’s been bad, too; I’m less happy about what I thought I was doing, back ten years or so ago, when I thought I was rehabilitating villains and being fair and just to them: Archimbault in Flamenca, various characters in the Roman de la Rose, innumerable male (or masculine-voice) lyric poets. I don’t want to risk throwing the baby out with the bath-water, and I do still agree with past-self on a lot of what past-self thought and said about Archimbault. But I’ve been increasingly uncomfortable about grey areas between “free speech” and “hate speech” when a speaker ought to know better, has the opportunity not to be an asshole, has access to non-asshole rssources, and yet still decides, as a free informed choice, to speak and act as an asshole. This is as true in some areas of 12th- to 15th-century Western European culture as it is of the educated first-world of 2014. There will be more on this: as being currently discussed on Facebook and in assorted feminist fora online. The Archimbault material needs reworking and some more slower rereading, associated primary texts too, and this will take time. The Archimbault material is connected to the Amor material, as Archimbault and Amor are integral (and indeed, in that past state of work, essential) to the narratological idea of “arch-players”: hence this is part of the January work.

But in the meantime, here are some spin-off applied ideas. They are related to “Flamenca” via bathing in springs: the waters of Bourbon-L’Archambault are reputed to be soft, sweet, of what to the modern skin is a slightly silicone-like feel; and one of their therapeutic uses (Medieval and later to currently) is gynaecological.

Here are some ideas for amorous innovations that would improve the lives of many, and make money. Who could ask for more? UBC Powers That Be, listen up.

With a slip-proof but comfortable exterior. This would be a natural venue for fake fur or velvety plushiness, preferably in leopard-print or hot pink, but individual tastes may of course vary. There’s room aplenty for variation, and for consequent marketing, sales pitches, and other forms of apprpriate commercialisation. See, sometimes commercialisation is appropriate: as for example here, when selling a product that is useful but not necessary, not vital for survival and continuing life; as contrasted with inappropriateness where commercalisation, commodification, sales and marketing do not belong (or, are “not proper” as well as offensive through being “improper”): universities, education, the free access to information; other utilities like health, water, air, food, shelter, power, public transport, work or other employment; rights, resonsibilities, justice, good governance, and all that is integral to free / open / civil society, the polis, a good res publica.

Much needed: instead of moving lubricant from container to hands, warming it, then applying. Which can be disruptive. Current solutions: disruption to proceedings, or cold hands, or extra hands (maybe we just need to solve employment problems instead, employing extra hands?)

Useful for: gynecologists, proctologists, anyone engaging in happy intimate relations with anyone else.

Maybe solar-powered? Turn the duvet one way out during the day to charge it, and at night, turn it the other way so as to snuggle underneath, no body parts poking out to get cold, but illuminated from above like being in a tent, or like sleeping out in balmier weather under the stars?

Happy 2015, and may new things be good things, and may part of that goodness be an increase in human (and other) happiness. 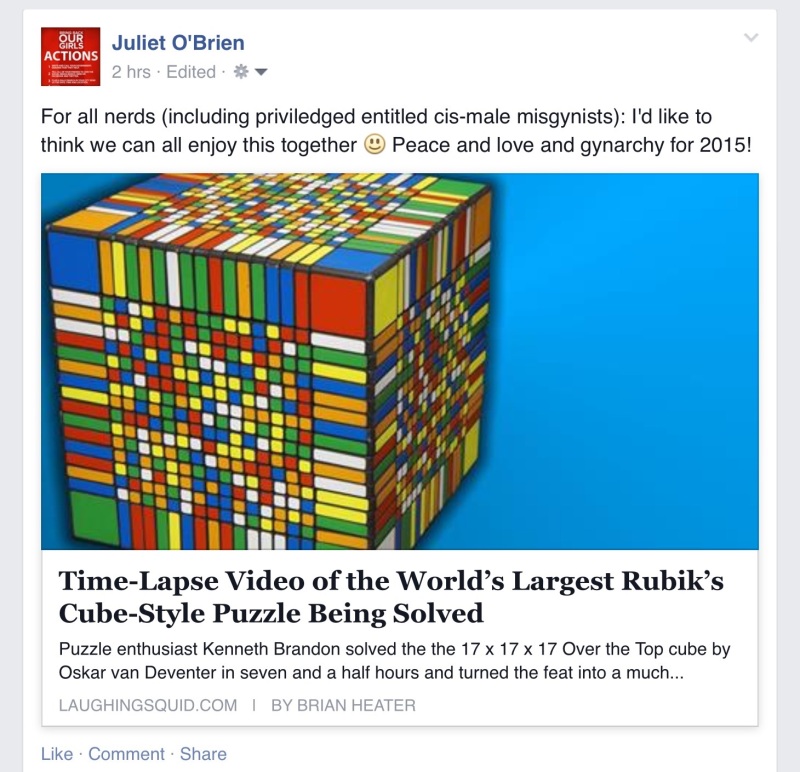