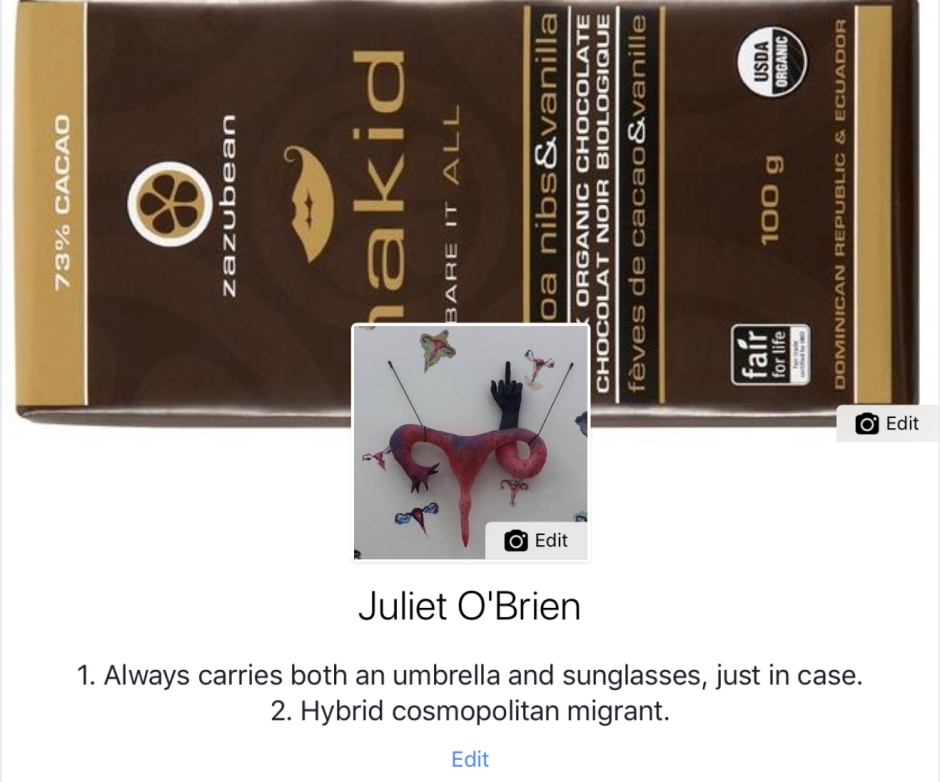 Once upon a time, a person changed an online profile picture. It was an electrically-supercharged day. The interwebs were buzzing with prayers to Hecate and the Morrigan, to Nemesis and the Erinyes, dark thoughts of the Glaistig, envy of selkies. Mixed in were occasional whispered wishes to Pax and Venus; sometimes any or all of the above uttered by the same people.

And so, naturally, that image came to life. She looked around. Next to her was a background picture of delicious black chocolate. So the image thought: well, if I’m real, maybe it is too? I should ask. So she did, and the chocolate replied. As the conversation warmed up, so did the chocolate, sending out delectable scents. And so the image said: you smell so enticing, I could eat you all up.

But I know that would be wrong, and would hurt you. Anyway, I haven’t been in existence for very long but I do know about this thing called consent. The chocolate smiled and replied: well, I am melting a little but I’m not a suicidal food and having you gobble me all up then making you sick through greedy over-indulgence would be a pointless sort of sweet revenge. I wonder if there’s any way we can give and take from each other, and create rather than destroying? maybe, I don’t know, do and make something together?

So they both sat quietly and thought for a bit.

A spark flew by—who knew whence, digital or human or divine—and they both jumped up with a jolt. Their eyes met and held, while the image gently dipped a finger in the chocolate, and let their darkness run down her; and licked it, and let the darkness run into her. All her consumptive lusts were stilled; filled with that moment of dark chocolate. Then, together, hand in hand, they wandered through the interwebs and touched others, spreading and intensifying that chocolate-delighting-blacking-out, sharing its joys, painting a world black; and so everything in the world became blacked out in the best way possible.

And darkness fell and there was peace on earth.

If this were a modern fairy-tale—for example a 17th-century French one subverting ancien régime absolutism and a totalitarian terrorist state—there would be a playful paradoxical moral at this point, perhaps disguised as something heavy-handed and sternly earnest …

… so I guess this is the 21st-century version.