Work in progress. In no particular order, except the chronological. Further verbiage may be added later.

This has been a long month on Twitter, and we’re only three-quarters of the way. It started here at UBC with the end of Fair Employment Week and “Thrive,” the “wellness week.” As you might imagine, that juxtaposition, the tokenism of such gestures, and the sloganeering involved led to discussion and criticism. That included some discussions about criticism itself, and the role (and perhaps duty) of faculty as critics in a public institution, such as ours is, in a civilised country, such as this one is supposed to be. We’d also been talking off and on about “outreach” (terrible patronising word: bridging, bringing in, in courteous fair welcome and humility and shared humanity) and the wonderful futuristic MIT Libraries piece.

Other continuing topics: refugees, fair welcome, tolerance, diversity, a love of learning and languages, open-heartedness, multiculturalism; and solidarity with assorted individuals, groups, causes, and events locally and around the world. All the usual hippie trendy lefty angsty privileged hand-wringing First World academic problems. Complaints about university administration and management. Ivory tower business as usual. We are all, as you know, fussy spoiled frivolous silly people. Especially us women. 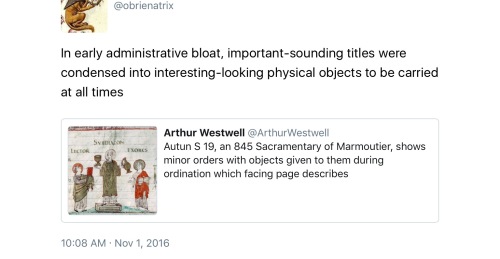 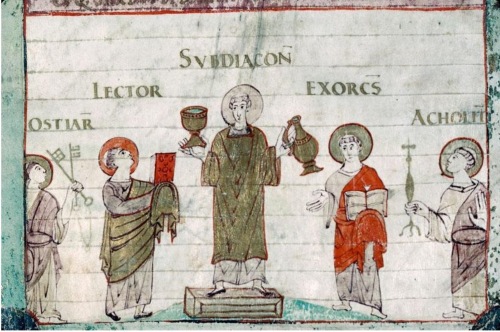 Hallowe’en, All Saints, All Souls. Further commentary. And my MDVL301A students went on a field-trip to see something real and live on campus:

Then there was the annual drama about the clocks going back an hour, what that signified historically and politically, and a desire to hibernate. (We North Americans have a slight advantage in that our clocks go back after those in Europe do, so we get to listen in to others’ complaints… and then react in exactly the same way, and the same way that we do every year… when will we ever learn?) The combination of Winter Time and, for people in Britain, “Bonfire Night” (a curious hybrid of layers of winter fire festivals and a 17th-c. religio-political event / act of terrorism) seems to have resulted, if my Twitter feed is anything to go by, in a heavy hedgehog presence. Hedgehogs risk being accidentally roasted in bonfires. More feminine soppy nonsense, then.

It was an odd sort of mood; my own is usually somewhere between “mixed” and, I like to think, “balanced” at the best of times; it easily turns into imbalance. That’s a fragile sort of balance, juggling a number of things, trying to keep them all in view and in mind; that plasticity and elasticity easily stretches thin. One sense of the wonderful and awesome Old Occitan word mesura includes allied ideas of a multiple complexity, and equilibrium, and the “measure” of judgement, fairness, justice, and wisdom. That mesura is connected to entendemen, which is mainly understanding but also listening, an active interactive engaged learning, and etymologically related to what “outreach” ought to be: reaching, holding, embracing.

Over those first few days of November, though, I’m not sure how much “mesura” was going on. Judge for yourself, I’m not sure that I’m yet capable of doing so. There’s a lot of delicate beautiful breakable imagery going on. Pathetic bleeding women, you might well declare. 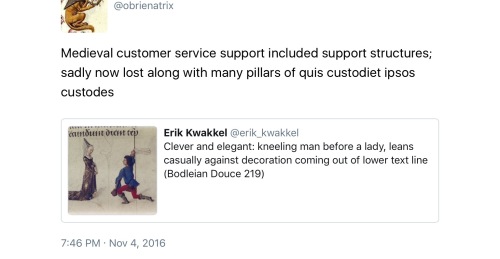 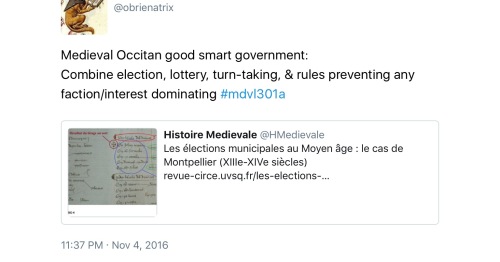 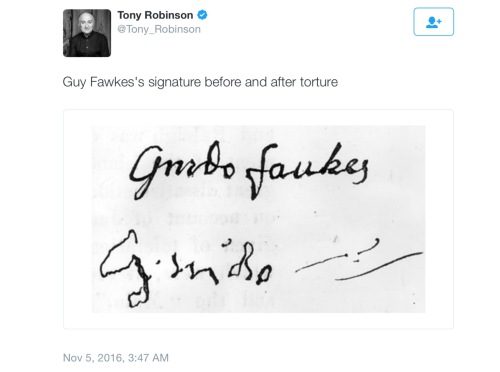 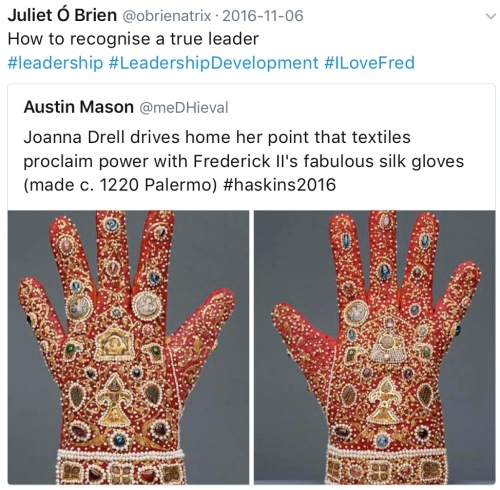 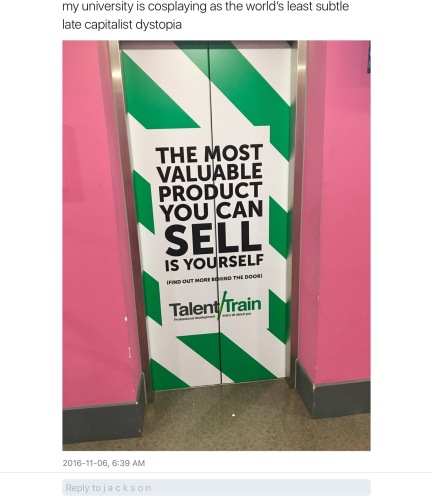 7 November
This was an uncomfortable day. Juggling hope nervously. 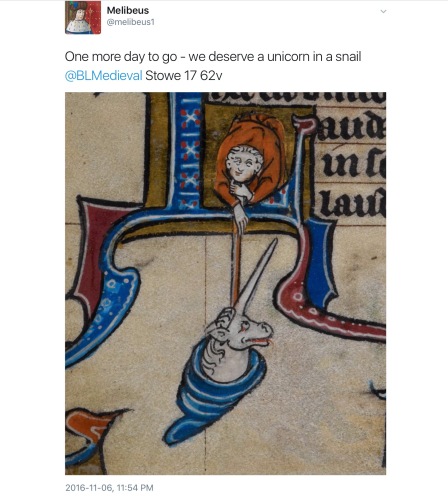 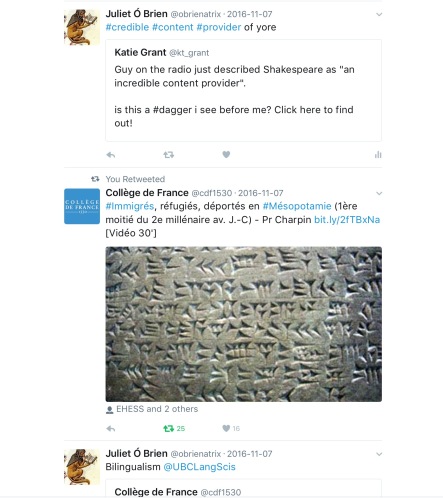 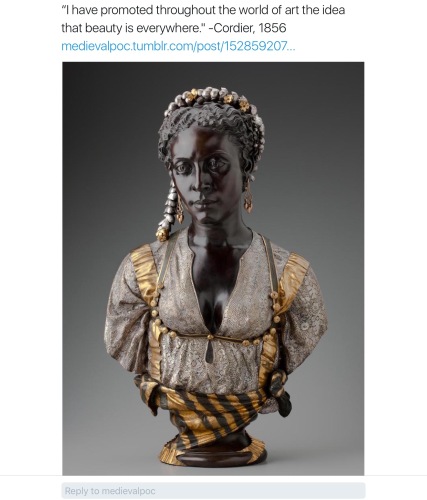 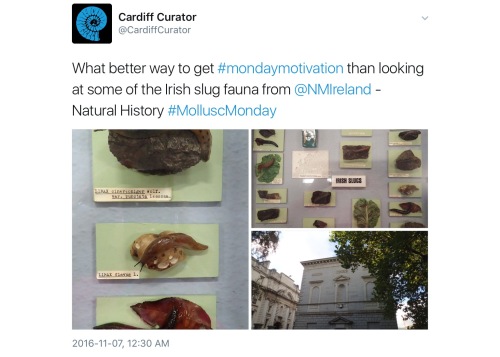 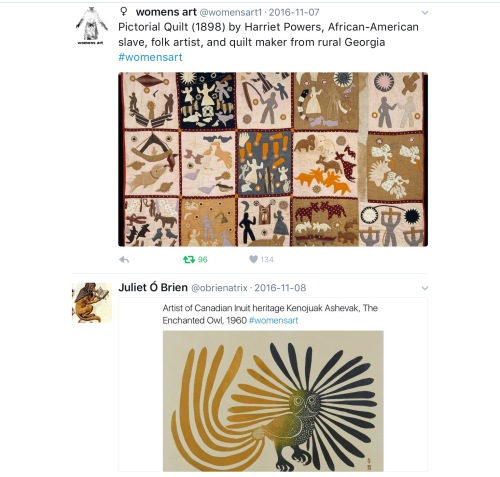 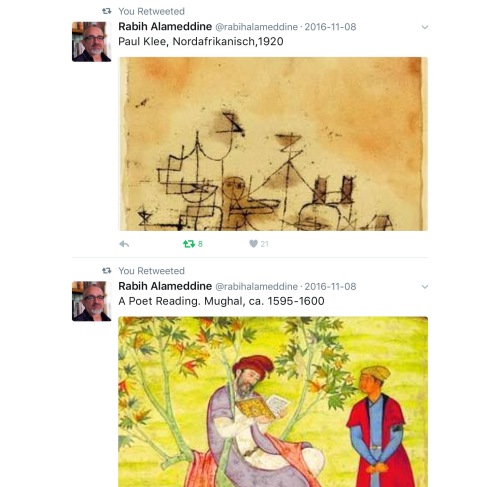 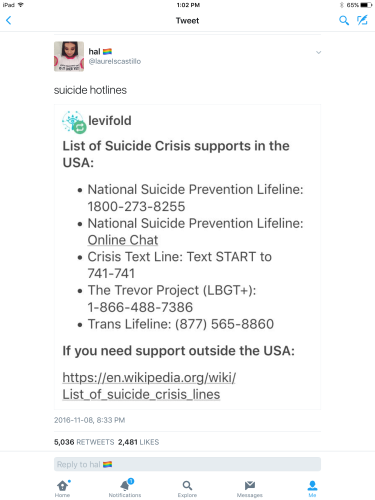 Meanwhile, lurking ominously in the background: a medievalist colleague’s Prophetweets of Merlin. Irrelevant old stuff; only worth mentioning when it’s useful for the neomedievalist perversions of neoliberalism, or for fascists. And, again, silly irrelevant pointless frivolous medievalists being silly.