Obrienatrix apologies for meta-meta-in-action recently. Reason: action in the real, outside, material world.

Some personal, family business, which is nobody else’s business, certainly not while we are all in this situation; though once my head is more clear, The Situation may make some meta-meta-incursions here. Then again, it is probably doing so anyway, in a tangential and laterally-thinking way. I would predict occasional direct reference to current family affairs, and waves of overtness coming and going in a way that won’t be predictable or controllable. Those waves may overlap with waves emotional and with more waving than usual of (impotent, tiny) fists (feat. very chewed fingernails). For all of which, and for this entire paragraph indeed: my apologies to Gentle Readers.

I felt some obligation to say something, but then again, damn it, this stuff is private and personal and absolutely does not belong in the public domain with all the grot and repulsive sub-/in-humanity that’s out there. Not you, I’m sure, Gentle Readers: but while celeb gossip mags used to inspire awe and a certain sneaky curiosity in me–sneaky as of course my main reaction was mockery and dismissal–there’s now also a shiver of disgust and sorrow at the pornographic objectification, nay, commodification. All in the name of The Numbers: circulation, popularity, sales.

Now, this is a free blog, done in one person’s occasional free/idle moments (a.k.a. when she ought to be doing something else), with no advertising or revenue therefrom. I find stats on this site most useful for seeing which posts people read the most, which also tend to be those with most content and good old-fashioned tangible pragmatic usefulness. See, I care about usefulness; OK, like anyone else, I like to see numbers go up too. I admit it. I still insist that usefulness is more important to me: what other people get out of a post (and this blog), whereas what I get out of it is secondary, because I’ve always been more of a reader-reception and ethical-writing person than an Art For Fart’s Sake type. That’s partly pure ego, of course, in a perverse way: I loathe and despise those masturbatory types, and would hate to be perceived as being that self-centred myself.

There will be more, later, on the perniciousness and folly of obsession with growth and perpetual progress. (I promise to try my hardest, ahem, to avoid the obvious V****a advertising references. Mind you, that’s not much of a promise, or promising much… ) Finally, economists are starting to catch up with what non-economists got laughed at for saying for years.

For now, and the point at hand: I have a lot more sympathy for celebrities than I did previously. Albeit about as much as previously for the magazines they live inside. Other reactions and reflections on finding hospital waiting rooms full of this pseudo-reading pseudo-material–work in progress on sorting my head out there. It’s weird to be hit by the realization of simultaneous extremes of tragedy and comedy, on several levels: this being a hospital, the circumstances of anybody in that room, specific ones for the three of us there, imagining those of other people, and the cultural specificity of West Fife and its very dark humour. It’s half-way to Glasgow in more ways than the merely geographical; and an area of great deprivation and some despair. Hmmm, so: figuring out the deconstruction of a great (i.e. very bad) joke before putting together the joke itself.

Add to those levels, though, that of these three people finding themselves in the same situation as anyone else in one of these rooms, picking up and leafing through celeb gossip mags just like anyone else does; well-off over-educated people, who like to think of themselves as not the sort who’d ever lift such a thing intentionally, let alone enjoy it in a non-ironic way. Trapped in a room with Hello, you read it. It’s there. It’s what you’re supposed to do. It would be rude not to: disrespectful of the nurses who donated their old copies to the room; insulting to visitors who have found some pleasure–or at least distraction and consolation and relief–in reading them. The more so if someone were to walk in, find you not reading the mags, start doing so themselves, and feel uncomfortable (we might be talking, being quiet, reading books, or indeed dissing celeb gossip mags and people who read them). Like I said, there will be more on celebs and their mags, later. For now, bad jokes aside, I’ve seen another dimension to them: social levellers. In a positive sense, for anyone can read them, and potentially talk to each other about them afterwards, giving some common ground.

But they also reinforce the fact that social differentiation in the outside world is stripped off at the hospital door. 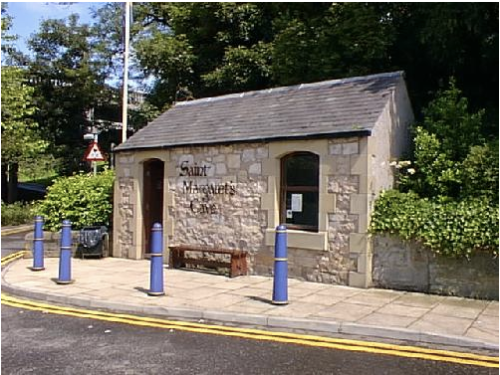 Not a dramatic entrance: door to St Margaret’s Cell (and spring). Viewed from aforementioned car-park, demonstrating importance of point of view.

Visitors are all equal: all here for the same reason, and that reason is more important than anything else. Wee neds hold doors open and otherwise behave. People you might be a little apprehensive about meeting after pub closing time: lambs. And affluent culturally-snobby types read celeb mags, non-ironically. I may not have read my mag the way it was meant to be read, but that whole NHS situation had influenced the frame of mind such that–well, I put myself in the shoes of other possible readers more than I’d have done usually. I laughed at it less; I was still angry about the abusive nature of these publications and the whole ‘sleb/slob culture, but angry because it abuses people: celebrities, the public, what little money they have. I really hope the mags do offer dreams and temporary colourful escapism, as at least that way they’ll have done some good in the world.

Patients are all patients, and they too are all equal: this is the NHS, and you’ve probably heard horror stories about it, aside from that whole State ownership of one’s body business the moment one steps into Their Territory. But this equality is one of highest common denominator, of right to care and responsibility for care. Dunfermline Queen Margaret Hospital (yes, the Medieval one, wife of Malcolm Canmore) has some of the finest medical staff I’ve ever met. Besides being good at what they do, though they are underfunded they work miracles with what they have. And they care.

Not only is the spirit of St Margaret alive and well in QMH–charity, care for the sick, indeed caring and care more generally–meet her in person, under one of Dunfermline’s most spectacular and well-publicised (and therefore renowned) car-parks. There is also a miraculous healing spring. Note that this is nowhere near the hospital, and that this is not a miraculously incorrupt body. Sorry.*

* Note also that Dunfermline is predominantly non-Catholic and old-school Labour, as well as post-industrial but not (yet?) post-capitalist. It has many attractions besides car-parks: abbey and royal palace from hey-day as Medieval national capital. Earliest known evidence of Freemasonry inc. late 16th c. tomb. Carnegie stuff, finest of all the spectacular–and of course underfunded and threatened–library, the first such; also a fine concert hall and marvellous park. Assorted shrines to extinct industries, from weaving to coal and docks. [For “status” read, I think, “statue.” Typo could have been worse.]

Unfortunately, when “historic attractions” is clicked on the local council’s Visit Dunfermline site, this is what the visitor first sees, if one hits the jackpot of misfortune on the rotation of list-items. 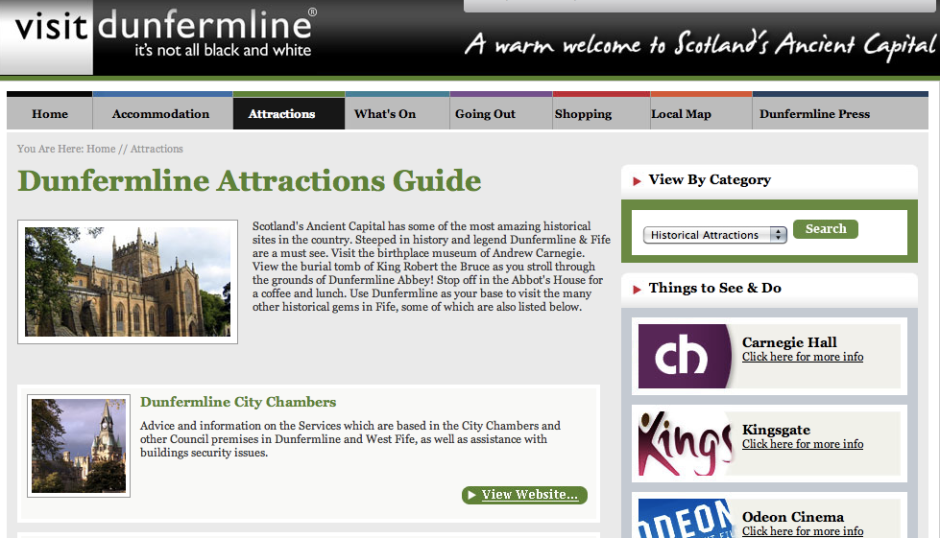 I’m delighted to see the Carnegie Concert Hall amongst the semi-ads on the right at all, let alone that well-placed, a glimmer of light in the gloom of what passes as leisure and entertainment here.

The black/white reference is probably not what you’re thinking, or at least what might come most immediately to mind, and might need some explanation. Dunfermline is very white. It does have a venerable past history of Others, being a prime landing and relocation point for migrants, post-glacial onwards; but the main Others currently are still white Europeans, for the most part: Poles, redheads, etc. Nope: the primary intended connotation is football.
It’s no deeper than that (and I mean that in both senses).
The Dunfermline Athletic strip is black and white, vertically striped; see also Origins of nickname.