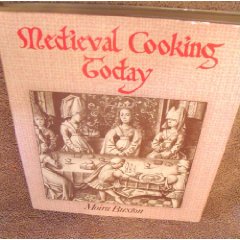 My very first encounter with gastronomic delights Medieval was through my Auntie Moira’s experiments on us, when we came to stay with her and my Uncle John. He died recently, and this post is dedicated to his memory: and to happy times spent together.

“Medievalist and cook, Moira Buxton, revives one hundred important 14th and 15th century recipes which she has tried and tested for cooking today. Selected from rare manuscripts and record-books of palaces and noble households” of England, France, and Italy.

…why not try the elegance of Fenkel in Soppes, a golden fennel soup; Funges, a dish of mushrooms and leeks served to Richard II….Enjoy a Crustard of Eerbis, crab or salmon prepared with almonds; Henys in Gauncelyne, chicken in garlic sauce; or Alows de Bef, ancestor of beef olives, but rolled around a stuffing of chopped hard-boiled eggs, onions and spices…” 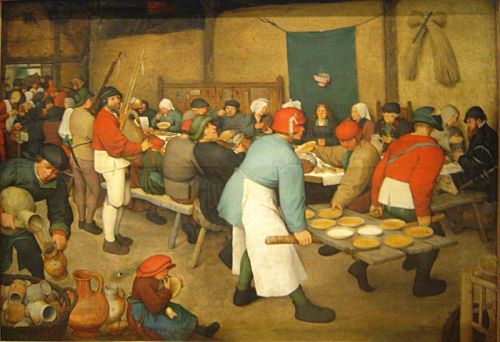 Moira’s influence would constitute the other major background factor that would eventually feed (oops) into my becoming a Medievalist; the other is more obvious – growing up in Belgium, surrounded by things Medieval, artworks in some of the best (at that time free) museums in the world, Gothic cathedrals. Food run through that too, though: there are Bruegels and Bosches that I’ve grown up with – looking at them in the pram, push-chair, toddling, seeing more of the painting as I grew taller – and many of these feature food. Albeit some of a rather fantastical and apocalyptic nature, and therefore maybe not so edible. Unlike real-world Belgian gastronomy. A favourite local dish, the stuff of nostalgic drooling now that I no longer eat meat: rabbit stew with caramelized onions, mushrooms, raisins, dates, lardons, and beer; changed little since the Middle Ages. The favourite restaurant claims the reason theirs is so good is that they never clean out the bottom of the pot properly, and the residual gunk has been accumulating for centuries. When they have to replace the pot (every century?), the gunk is transferred – with due solemnity and a blessing by the local priest – to its new home.

Some new publications in this most essential of Medieval areas:

The earliest Old French herbal in verse, here edited for the first time, is a surprisingly comprehensive work (3188 octosyllables), based on an eleventh-century Latin treatise ‘De viribus herbarum’ attributed to a certain ‘Macer’.

Review by Christine Rose of Constance B. Hieatt, A Gathering of Medieval English Recipes.
The Medieval Review.
TMR 09.11.09 c/o  IUScholarWorks

This slim volume is an essential addendum to the corpus of printed Middle English culinary records, presenting scores of recipes that have not before been edited and documenting the heretofore unmarked existence in manuscripts of many recipes that resemble closely those in other edited collections. Professor Hieatt is the foremost specialist on medieval English manuscripts containing culinary materials. She is the author of An Ordinance of Pottage: an Edition of the Fifteenth Century Culinary Recipes in Yale University’s MS Beinecke 163, with a Commentary on the Recipes and Adaptations for the Modern Kitchen (1988); co-author (with Sharon Butler) of Cury on Inglysch: English Culinary Manuscripts of the Fourteenth Century (Including The Forme of Cury) (1985); and with Butler and Brenda Holsington Pleyn Delit: Medieval Cookery for Modern Cooks (1996), as well as having written a host of scholarly essays on English cookery texts and medieval cuisine. Thus, her latest “gathering” represents the expert product of years of poring over manuscripts, some of which contain only a small group of recipes, or recipes in isolation, as well as those that were overlooked in earlier editions. This volume brims with learned and painstakingly detailed study of individual recipes and recipe collections, and while not undemanding reading, provides a crucial resource for scholars of the culture of medieval England and its dining tables. Plus, one gets a welcome glimpse of the manuscript contexts of culinary materials.

After a brief explanatory introduction, Hieatt presents her key bibliographical references for the study of these culinary manuscripts, and then follows an alphabetical list–by location–of 82 (primarily British) MSS containing Middle English culinary recipes that have not been printed or listed until this volume, noting dates, editions, critical discussions, unedited materials in each, or those materials in need of re-editing. Graduate students and scholars interested in the field might detect here possible new editing tasks. Noted too are any other published books, Forme of Cury, for example, that contain recipes resembling the ones in the manuscript under consideration. This manuscript inventory provides a wealth of information on medieval English household books (although one might wish to have the Table of Contents from each MS at hand to determine what company the various recipes keep–but that is extraneous to Hieatt’s project), and the author provides references for MS descriptions where possible. The manuscript list is followed by the gathering of each MS’s newly-documented Middle English recipes preceded by a headnote adding more detailed information about the recipe contents of the MS, including a description of the MS, notes on the problems Hieatt encountered with each MS and relevant points of interest about individual codices. She then lists the recipes, either complete where warranted–if the recipe is unknown–or simply the title, often with notes about the significant differences in content from other versions of the recipe, having cited the source of the edited version in the headnote. Also included, at the end of this volume (155-170), is a supplement to her Concordance of English Recipes: Thirteenth through Fifteenth Centuries prepared with Terry Nutter and Johnna Holloway (2006).

Intended as a reference work, the volume may best be used in conjunction with Thomas Austin’s edition of Two Fifteenth-Century Cookery Books (EETS o.s.91, 1888, repr. 1964) and Hieatt’s Cury on Inglysch, since some recipes supplied in the present volume duplicate and/or occur in the same order as recipes in those earlier collections–in which case, Hieatt merely notes the recipe’s name and those significant differences from individual recipes edited in those existing collections and does not reprint the entire recipe if it is readily accessible elsewhere. Many recipes included in this volume are to be found more or less recognizable in the other major collections of English medieval recipes: An Ordinance of Pottage, the Noble boke of cokery, and Diversa Servicia. The recipe books generally proceed in the order of the early English meal: pottages (first), fish, fowl, meat; then to fried foods and sauces, compotes or drinks (last). In the present volume, some divergences from these models are considerable–such as the addition of more or different ingredients or processes, or the additions or deletions of entire recipes from the order in which they are listed in other collections, which call attention to themselves by their inclusion or exclusion in such a close relative of other compilations. But, ordinarily, there is little marked disparity between collections of the same sets of instructions. Recipes tend to be copied from their exemplars in virtually the same order, as one would expect, so whole sections of recipes are identical to those listed in Forme of Cury, or Ordinanance of Pottage, for example. Yet some recipes edited here have no identifiable parallel elsewhere, and thus this volume is significant for the project of completing the records of Middle English recipes. Hieatt wisely does not include a glossary, and refers the reader to the glossaries in both Austin’s edition and Cury, but does elucidate some of the more impenetrable terms in footnotes. Even experienced Middle English scholars are likely to require those additional glossaries, since one of the joys of encountering this book’s ample selection of recipes is the extraordinary variation in orthography for even common words designating ingredients or culinary operations. These recipes, as well as those in the other notable Middle English culinary collections, possess the flavor of late Middle English colloquial speech, use expressions and sentence structures rare in literary texts, and of course employ the specialized vocabulary of food. A selection of them would make a beneficial addition to any Middle English class (“Take faire clene befe and gobbe it small…”; “but stere hem well fro brynnyng to the potte, & yff it be not tendyde it is loste…”; “& kepe the parynges, & whash the rasynces in clene water; then putte hem in warme water iii howres…” ). The scribes employ a whimsical lack of uniformity of spelling, as they transcribed the words they heard or found in their exemplars. “Gridiron,” for instance, appears in late- fifteenth century contexts as grydyrne/grydyrn/gryndyryn/gredern; “verjuice” as verjuis/veryous/verys/vergous; and “boil” as buyle/boyle/boile/biyle/boyl/boyll/bule. Not even the available glosses and the MED satisfactorily solved every odd spelling for Hieatt (or me) without recourse to other versions of a particular recipe, and some terms remain obscure, due to blurring or damage to the manuscript, scribal error or undecipherable graphemes. The questioned terms “tanersale” (127) and “buron” (121) are probably versions of “tavorsay”(a spiced fish-head dish) and “brawne” (flesh) This volume also corrects various errors in Cury and emends some of the published Handlists from the Index to Middle English Prose, noting recipes neglected or incorrectly listed.One wonders when reading some of the garbled directions given in the manuscripts (see Bodleian MS Ashmole 1393, recipe #5 for Chawdrow– chauden? “Take broun bred tostid & of the bloud of the foule, than drawe it & caste in vinegre & peper, with mawe & lyvere mycid, & the fotte the nonys wrapped in the same sauce”) how or if any cook ever used some of these recipes and why no contemporary reader/cook rectified obviously weird or incorrect instructions for dishes that appear in another collection in more or less accurate form. Some recipes present themselves in the MSS in highly abridged form, as if notes for an experienced cook. As ever with medieval culinary texts, one is struck by the amount of almond milk used, for example, and the variety of birds, fish, and beasts found on medieval English tables, whether frequently, or, as in the case of swans or peacocks roasted and re- dressed in their feathers, on festive occasions.

Hieatt has contributed yet another crucial tool for the study of English material culture, Middle English manuscripts, and cuisine in the late Middle Ages. Her legacy is an important one, and all subsequent scholars of medieval cookery are in her debt.