Not awfully exciting – as the backlog still needs to go up here – but I have actually done some updating here on MMM. In between bouts of course-planning. Which is rather fun and not unrelated.
One course is Medieval to Early Modern (and will involve a lot of online sources and resources, as that’s both fun and productive – fulfilling the necessary Chaucerian requisite of sentence and solaas).
The other isn’t, but picks up on Medieval topics – indeed, is actually built around topics in my own current à faires a.k.a. research work in progress.

I am most amused by the Google image search results for “medieval education.” Revealing indeed for that part of course design that is that reflection-on-teaching business; pedagogy, methodology, call it what you will, it’s all very meta-.
Many of the images look a bit like this: 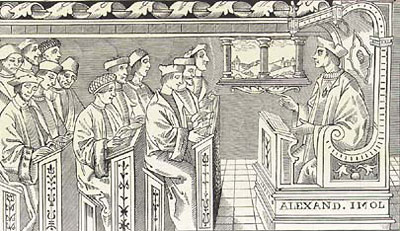 – note the spatial divisions, territorial separations, dais and lectern protecting the Master, and general good behaviour. As has surely ever been the case throughout the history of teaching, a certain percentage of the class are asleep.

Very studious, eyes on books, and – as similarly usual in any given class – at least one person is trying to hide his worry and/or surprise, due to encountering the text in front of him for the first time. Tsk – those students who don’t do their preparatory work like they should. See, the Master has spotted that and is just about to take him to task. It’s all right, O educators everywhere, further below there’s a student who suffers far worse.
And there’s one who’s amused; that joy for Masters everywhere, the student who Gets It.

There are possibilities for greater interaction – the following lot seem to be having more fun, too: 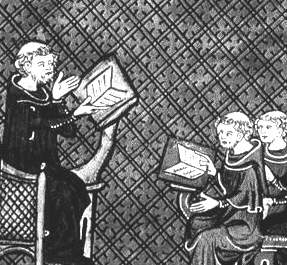 Certainly, everyone looks less droopy and more engagé, alert and attentive and with eye contact, and spatially more “on the level”. Maybe it’s the tonsures, keeping one’s head cool and the brain at optimum operating temperature. That’s the real reason for the egg-head-intellectual association.
It’s a good advert for the joys of the book. Curiously, it also looks like an early representation of netbooks and notebooks “carrying images” of books “on/in” themselves.

The following Master is aiming for the same but alas, it was not to be. One student looks confused – on the verge of boredom, the expression is borderline between the two. In good communicative approach, let’s play Spot the Difference: 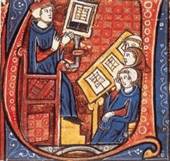 OK, one can be too laid back: 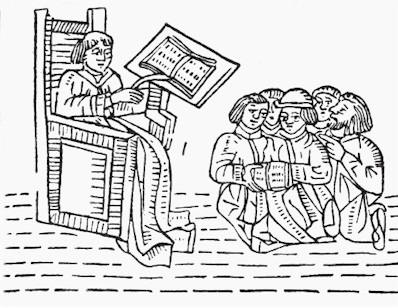 Though, yes, spot the irritating swotty one – there is always one.
Alternatively:
Smart Alec vs. Master who has long ago given up / no longer cares.
Swot and Master in happy discussion, while the Master has given up on the others and/or they have given up.
On that book-strap/marker in the Master’s hand: is he about to Throw The Book at someone?

It’s all about happy mediums. The middle way.

Amongst the top Google hits, though, we also have images such as 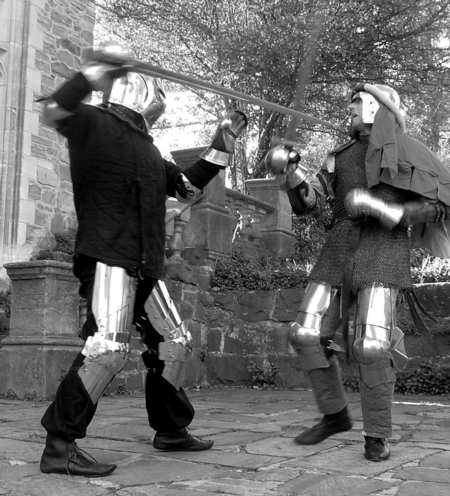 I guess this would be the “direct” method. Takes all sorts.

Last but not least, a rare image of a woman teaching (though it should be taken into account that this is probably a personification of Geometry): 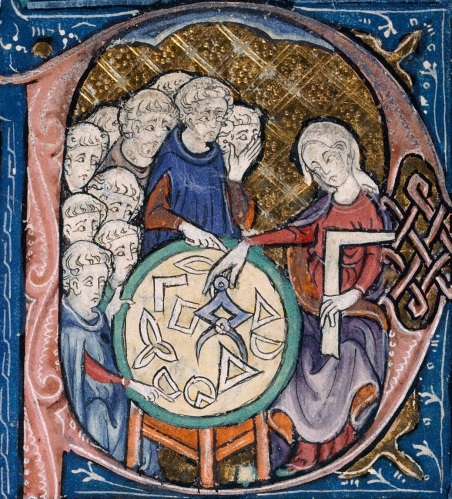 Allegorical vs. realistic issues aside, I like this approach.
Hands-on.
Spatially equal and with the possibility of mobility; parallels between physical and mental fluidity and energy. [Ed. Starting to sound newagey. Stop it right now. This is a serious blog.] The Mistress is involved, but calm, graceful – gracious too? everyone does look polite, without being too ramrod-up-bottom or obsequious.
The eyes tell of active interest and – that holy grail – rapt attention. Keen people all round, and physical/behavioural mirroring. Lots of fingers pointing, and one student so overcome that they’re about to pass out and/or throw up. Mind you, this could be a cautionary tale for students who don’t do the requisite preparatory reading before a class.
This is exactly what we’re aiming for. Well, maybe not causing physical discomfort and distress. Students are, after all, very much still people. (Not, dash it all, “full time equivalents” or “credit units” or other NewSpeak horrors. People.)

I like to think they all continued the discussion afterwards together over hot beverages and cake.